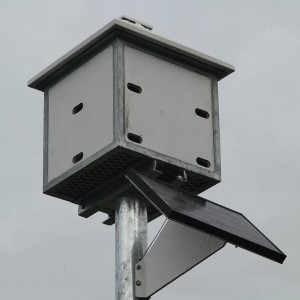 The aims of this project are to educate the public about and raise awareness of the plight of Swifts, and to provide some much needed nesting sites for Swifts in Athy.

We are using the project to try to encourage and inspire people to renovate in a more sensitive manner and to install swift boxes on suitable buildings where-ever possible, and we are glad to say that the project has gained a lot of local interest. We have gained new members and we are now working with a local school to assist them with their Biodiversity Green Flag as a direct result of this project. We have used this project to get valuable publicity for the plight of the Swift and for the importance of biodiversity in general.

The Swift Tower was installed in 2015 and will be continued to be monitored for activity into the future.

In recent decades there has been much concern for Swifts as their numbers have been in decline throughout many parts of their range. The Bird Atlas 2007 – 2011 shows there has been a substantial loss in range in Ireland since 1970, while recent Countryside Bird Survey data shows an alarming 39% decline between 1998 and 2013. One of the reasons for this decline is thought to be the absence of suitable nest sites. Previously, swifts would have nested in crevices in buildings or in small openings under roof tiles or eaves. In more recent years, due to changes in the design of new builds and repair and renovation of old buildings, suitable nest sites are decreasing. 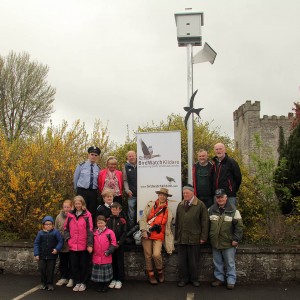 In 2014 BirdWatch Ireland completed a national Swift survey identified a population in Athy that was experiencing decline due to a lack of nesting sites for the reasons mentioned above. The Kildare branch hopes that the Swift Tower installed will combat this. The Swift Tower installed is a free standing solar powered tower with 12 individual nest boxes.

The Swift is about the same size as a Swallow but is all dark. It spends virtually all of its life airborne and is never seen resting on wires unlike Swallows and Martins which can frequently be seen resting. The weak and small feet of a Swift only allow it to cling to vertical surfaces or shuffle akwardly on the ground (at the nest). In flight it has a distinctive shape with scythe shaped wings held straight out from the body and is one of the fastest flying birds in Ireland.

Swifts breed throughout Ireland arriving from April onwards. Most of them will have departed by mid-August, although a few individuals can usually be seen up until the start of September. They over-winter in tropical Africa.

Funding for this project has been provided by Kildare County Council and the Local Agenda 21 Environmental Partnership Fund and we are very grateful for their support.