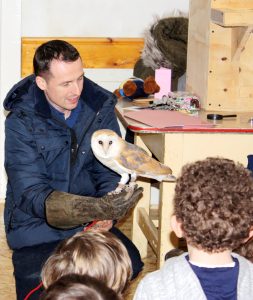 The Kildare branch of Birdwatch Ireland and the Irish Midlands Ringing Group have joined forces to set up a project to support the Barn Owl in Kildare. This team of champion bird enthusiasts are aiming to erect dozens of Barn Owl boxes throughout the county over the coming years.

As part of this we have successfully applied for funding to erect Barn owl boxes in the vicinity of the Drehid dump site due to the fact that we had 6 records of owls in the general area.

The erection of Barn Owl nest boxes has continued again during this winter (2016/2017) with the help of a team of our branch members, the interest of the farming community in the county and continued generous funding from Drehid and Kildare County Council and as of February 2017 we have 65 boxes placed on farms around the county and have records of almost 100 possible sightings of Barn Owls since the project began.

This January (2017) we received our first evidence of a Barn Owl using one of our boxes. We have managed to collect several pellets from the same shed and have placed a wildlife camera nearby to hopefully capture the first images of a Kildare Barn Owl. We will not be recovering the camera until the summer, to avoid any disturbance of the bird during the nesting season. Keep an eye on our facebook page where we hope to publish the photos in due course.

Unfortunately the Barn Owl has been in decline in Ireland for several decades. It has suffered a 50% decline in distribution in the past 50 years and many traditional sites used for decades are now silent. County Kildare has been especially hard hit with only a handful of records reported in the past 5 years.
Evidence from other counties such as Limerick and Kerry however has shown that Barn Owls respond positively to sympathetic management. The provision of suitable nesting boxes can increase the breeding success of the population and enable to birds to regain a foothold in the countryside.

How you can help 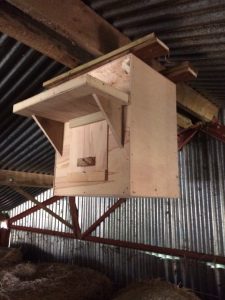 If you have seen, or know of the presence of a Barn Owl, we would love to hear from you. Once we know the location of the owls we can erect nest boxes within the vicinity to provide additional shelter and roost sites for the population. With your help we can reverse the decline and secure the future of the iconic bird in the county for future generations of Lily Whites!
For further information or to report a bird please contact us on kildarebarnowls@gmail.com.

About the barn owl

The Barn Owl is a native resident bird in Ireland, living out its life closely associated with man. However its nocturnal habit means that it will often go undetected and its presence is usually only confirmed by fleeting glimpses of a bird silently crossing the road in the car headlights or flitting past a street light shortly after dark. To all intents and purposes, the Barn Owl hunts while we sleep!
Despite its illusive behaviour, many of us have managed to spot a Barn Owl or know of its presence in our locality. They are particularly fond of old ruins and quiet unused sheds where they roost by day. They will use an old chimney or the attic of a disused farmhouse to hide from the daylight and holes in trees or buildings are usually selected for breeding.
The favourite food of Barn Owls is rats and mice. They get their name from the habit of hunting their prey around farmyards and farm buildings but they also comb the hedgerows and crop edges by night in search of prey. In many parts of the world d they are a part of the integrated pest management programmes used by the farming community. 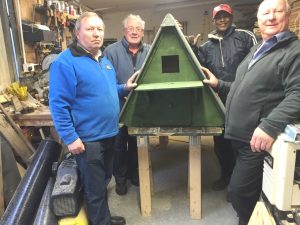 The branch applied for a Community Grant from Drehid Waste Management Facility in conjunction with Kildare County Council. The application was successful and the grant awarded will fund the cost of acquiring and erecting the nest boxes as well as some promotional material.