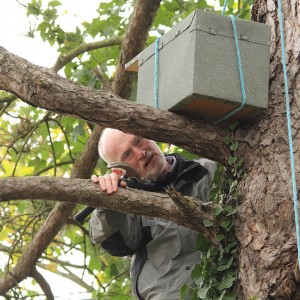 The Kildare Branch of BirdWatch Ireland is working to install nest boxes for Kestrels at suitable locations in the county. These are mainly on farmland in the north of the county. Individual farmers have been contacted and where they are agreeable, nest boxes have been installed on the farm.
Additionally this project has an educational element to it. The branch has produced a leaflet which lists some of Kildare’s less common birds including the Kestrel. Particularly for the Kestrel, its diet is identified. This is because many farmers are concerned that the Kestrel may eat smaller birds, but in reality these make up only a small portion of the Kestrel’s diet.

The last bird atlas, which collated data on breeding birds in Ireland, painted a poor picture of breeding birds of prey in Kildare. Due to a loss of natural habitat birds of prey are more likely to use farm buildings as nesting sites, however Kestrels have quite specific requirements and nest boxes are necessary to increase the successsful fledging rate. A member of our group has worked with a small number of farmers over the last few years where he installed kestrel boxes in outbuildings. These were successful so the branch decided to roll out the scheme across the the North of the county.

Who will benefit from this project?

Local farmers will benefit by increasing the biodiversity of their farms and and increased number of Kestrels in an area can help to control rodent numbers. BirdWatch Ireland and the British Ornihoolgy Trust will beneft as we will send on the data on nesting adates aand hatching/fedging rates.

Most importantly the general public will benefit as Kestrels are an important part of our local heritage and this project will help ensure that they don’t disappear in Kildare. 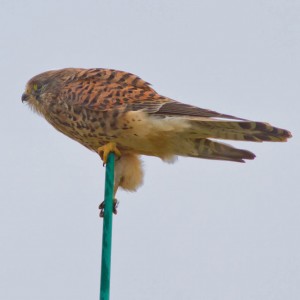 The Kestrel is a species of falcon. It’s a small bird of prey with long, relatively narrow wings and tail. It has a short hooked bill for eating meat. It usually hovers with a fanned tail when hunting for its prey. Male and female birds have different plumages but both sexes are recognised by their brown back and inner upperwings which contrast with their dark upper outer wings. Confusion with Sparrow hawk is possible but Kestrel has narrower and straighter wings and flies using less gliding in its flight. Its diet consists mainly of small mammals, but it will also take insects and invertebrates and sometimes birds.

Funding for this project has been provided by Kildare County Council under the Local Heritage Grant 2015. We are very grateful for their support.