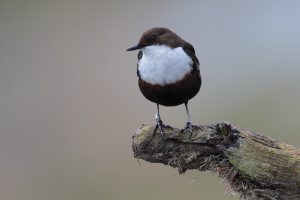 Kildare County is composed of two major river catchments, the Liffey which enters from the east from Wicklow draining the eastern and northern parts of the county, and the Barrow which runs along the western edge draining the north western bogs and the western and southern farmlands down as far as Athy. In addition, a number of minor streams in the northwestern part of the county empty into the Boyne.

Recent maintenance on many of the county’s bridges has covered over traditional holes and cavities which Dippers would have used for roosting and nesting. So, in winter 2016, a group of members have put up nest boxes under many of these bridges. In total 33 nest boxes have been installed thanks to funding from Kildare County Council. Kildare County Council have also given permission to continue to install nest boxes post maintenance of the bridges.

Additionally the Irish Midlands Ringing Group (IMRG) are collaborating with the Kildare branch by colour ringing the breeding birds to record their nesting success, movements and survival of the Dipper population. The river catchments may show different dipper productivity due to variation in water quality and other factors. As of February 2017 members of the IMRG have caught and colour ringed 26 birds under the same bridges in winter 2017.

Recent maintenance on bridges in the county has covered over traditional holes and cavities thus removing suitable nest sites. Also, given the major river catchments in the county, Kildare is an important location for Dippers and both the nest box and ringing efforts will help further understanding of how the Dipper is doing in Kildare.

How you can help

If you are near a bridge in the county this summer, look out for colour ringed birds and report the details to BirdWatch Ireland Kildare Branch at birdwatchkildare@gmail.com or the Irish Midlands Ringing Group at irishmidlandsringinggroup@gmail.com.

The Dipper is a widespread resident along rocky streams and rivers. It is a little smaller than a Blackbird and appears very compact and dumpy. Its name comes from the fact that it bobs up and down when perched on a stone or branch over the riverbed.

The adult is reddish-brown with a large “bib” of white on the throat and breast. It also has a broad rusty brown patch where the white bib ends on the breast. Male and female look identical though the female tends to be the smaller of the two. Juvenile Dippers have the brown plumage tones replaced with grey and the white bib reduced to a small area on the throat. The underparts are barred grey and at close range, a small white eye ring can be seen.

When disturbed the birds often give a short, sharp “zrt”, while song is a slow, melodic series of squeaky notes resembling the songs of both Sedge and Reed Warbler. Although relatively quiet, the song can be easily heard over the noise of the stream/river.

Dippers feed on aquatic invertebrates, such as the larvae of caddis and mayflies. These are caught by diving from the surface and searching the bottom of a stream or river by walking on it. They use their wings underwater while searching under stones and rocks for their invertebrate food. They are very sensitive to changes in water quality.
Dippers breed along fast-flowing streams and rivers, with plenty of exposed rocks. In Ireland, the majority of breeding pairs are found in uplands. The nest is sited in a hole in the river bank, behind a waterfall or under a bridge. They will also use nest boxes placed in suitable locations.

This project is being funded by Kildare County Council, who have also given permission to install the nest boxes post maintenance of the bridges, and we are grateful to them for their support.