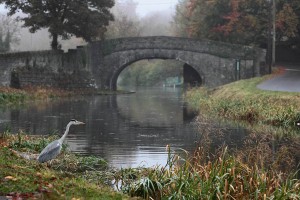 The grand Canal runs from the River Shannon at Shannon Harbour, Co Offaly to Dublin city, passing through the towns of Tullamore, Edenderry and Sallins to name but a few. As well as the aquatic habitat of the canal itself, it is bordered by hedgerow and farm land.

The canal is host to a wide variety of birds throughout the year with the hedgerows, providing ample cover and food for wrens, donnocks, robins, thrushes, tits and finches. In summer, you will hear the chattering, rattling, buzzing, scratching whistling sound of the sedge wabler, a very eclectic song. Also at that time of year, the Leinster Aqueduct is alive with swallows, sand martins and housemartins chattering and buzzing away on their high speed aerial pursuits. Watch out for swifts high overhead too. A pair of grey wagtails have nested at Digby bridge in previous years, so be sure to watch out for this elegant little guy. In winter, the berry-laden Hawthorne and Holly attract all four species of thrush. Great herons are a permanent feature on this stretch, as are mallards and several pairs of moorhen.

As you walk along, you might be lucky enough to spot the elusive electric blue tones of a Kingfisher flying low and fast over the water, or luckier still to see one perched, motionless on a overhanging branch in preparation for trademark vertical dive.

Sallins is a good spot from which to start exploring the canal. Heading west from Sallins, the canal is well serviced by a road, which goes from Sallins village, over Leinster aqueduct, and on to Digby Bridge. From here on out, the road is never too far away from the canal and there are well maintained grassy towpaths along most of the canal.

You can also head east from Sallins, towards Dublin. Pass under the railway line and along the well-wooded and secluded grassy track that runs all the way to Ponsonby Bridge near the village of Ardclough. For both Walks parking is available along the canal bank in Sallins. The map below shows the route from the N7/M7 junction 9 to Sallins. 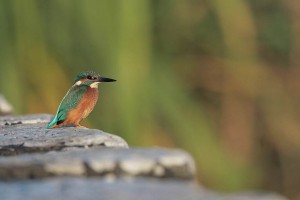 View the Grand Canal at Sallins on the map and get directions.